VSCode is a multi-platform open-source programming editor developed by Microsoft and volunteers. It has support for many programming languages using extensions. This is the recommended editor for Firefox development.

For more general information on the VSCode project see repo.

For C++ support we offer an out of the box configuration based on clangd.

Leveraging the clang toolchain compiler we now have support in the IDE for the following features:

6. Rename symbol, all usages of the symbol will be renamed, including declaration, definition and references

7. Code formatting, based on clang-format that respects our coding standard using the .clang-format and .clang-format-ignore files. Format can be performed on an entire file or on a code selection

9. Basic static-code analysis using clang-tidy and our list of enabled checkers. (This is still in progress not all checkers are supported by clangd)

Clangd supports some commands that are specific to C/C++:

This command navigates from the currently open header file to its corresponding source file (if there is one), or vice versa.

This command can be invoked from the command menu (activated via F1), or using its keybinding of Alt+o (Alt+cmd+o on Mac). The keybinding can also be customized in Keyboard Shortcuts.

In order to build the configuration for VS Code simply run from the terminal:

After that, subsequent ./mach build invocations will automatically run the Clangd integration.

If VS Code is already open with a previous configuration generated, please make sure to restart VS Code otherwise the new configuration will not be used, and the compile_commands.json needed by clangd server will not be refreshed. This is a known bug in clangd-vscode extension

When setting the preference

you might find that this isn’t working on large source code files, but triggering formatting manually works. This is due to the default timeout for formatOnSave, which is quite short (750ms). You might want to increase this timeout, e.g.

VS Code provides an extension that lets you use any remote machine with a SSH server as your development environment. No matter if it’s Linux based, macOS or Windows, as long as the target machine offers a SSH connection, it can be used for development.

No source code needs to be on your local machine to use VS Code remotely since the extension runs commands and other extensions directly on the remote machine.

In order to setup a connection please follow these steps:

1. Open VS Code and select from the left side panel Remote Explorer 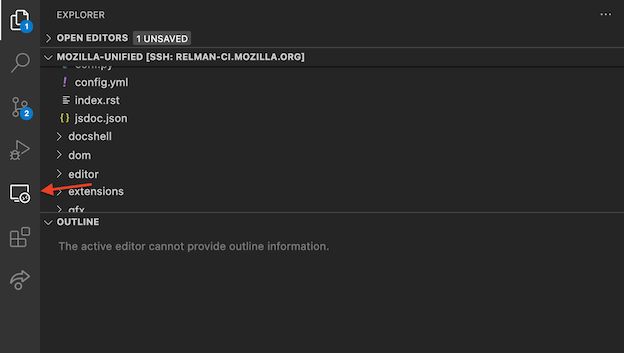 2. From the Remote Explorer panel select SSH Targets and click on Add and enter the connection details

3. Click on the connection that you just configured at the previous step

4. Finally you should be connected to the desired remote SSH server 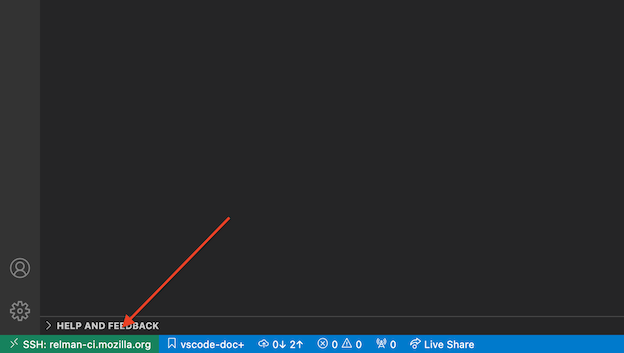 Please note that during the first connection VS Code will install itself remotely and also install all of the needed dependencies.

VS Code provides number of extensions for JavaScript, Rust, etc. By default, Firefox source tree comes with its own set of recommendations of Visual Studio Code extensions. They are listed in .vscode/extensions.json.

For Rust development, the rust-analyzer extension is recommended. See the manual for more information.