DAMP (DevTools At Maximum Performance) is our test suite to track performance.

How to run it locally?¶

Note that the first run is slower as it pulls a large tarball with various website copies. This will run all DAMP tests, you can filter by test name with:

This command will run all tests which contains “console” in their name.

Note that in continuous integration, DAMP tests are split in smaller tests suites: damp-inspector, damp-other and damp-webconsole. Actually --suite damp is only used locally because it contains all possible tests and makes it easier to use. But if needed you can substitute damp with any of the other test suites if you want to only run tests associated to a given test suite. You can find the mapping between tests and test suites in damp-tests.js.

When passing DEBUG_DEVTOOLS_SCREENSHOTS env variable, screenshots will be taken after each subtest was run. The screenshot will be opened in new tabs and their title includes the subtest label. Firefox won’t automatically close so that you can view the screenshots.

This will automatically record the tests and open the profile. You may use the following command in order to focus on just one subtest run:

How to run it on try?¶

How to get performance profiles on try?¶

Once you have a successful try job for damp:

This should start a new damp job called damp-p. Once damp-p is finished:

It runs all these three tests two times. Each time against a different web page:

Then, there are a couple of extra tests:

How to see the results from try?¶

First, open TreeHerder. A link is displayed in your console when executing ./mach try. You should also receive a mail with a link to it.

On the bottom panel that just opened, click on “Compare result against another revision”. 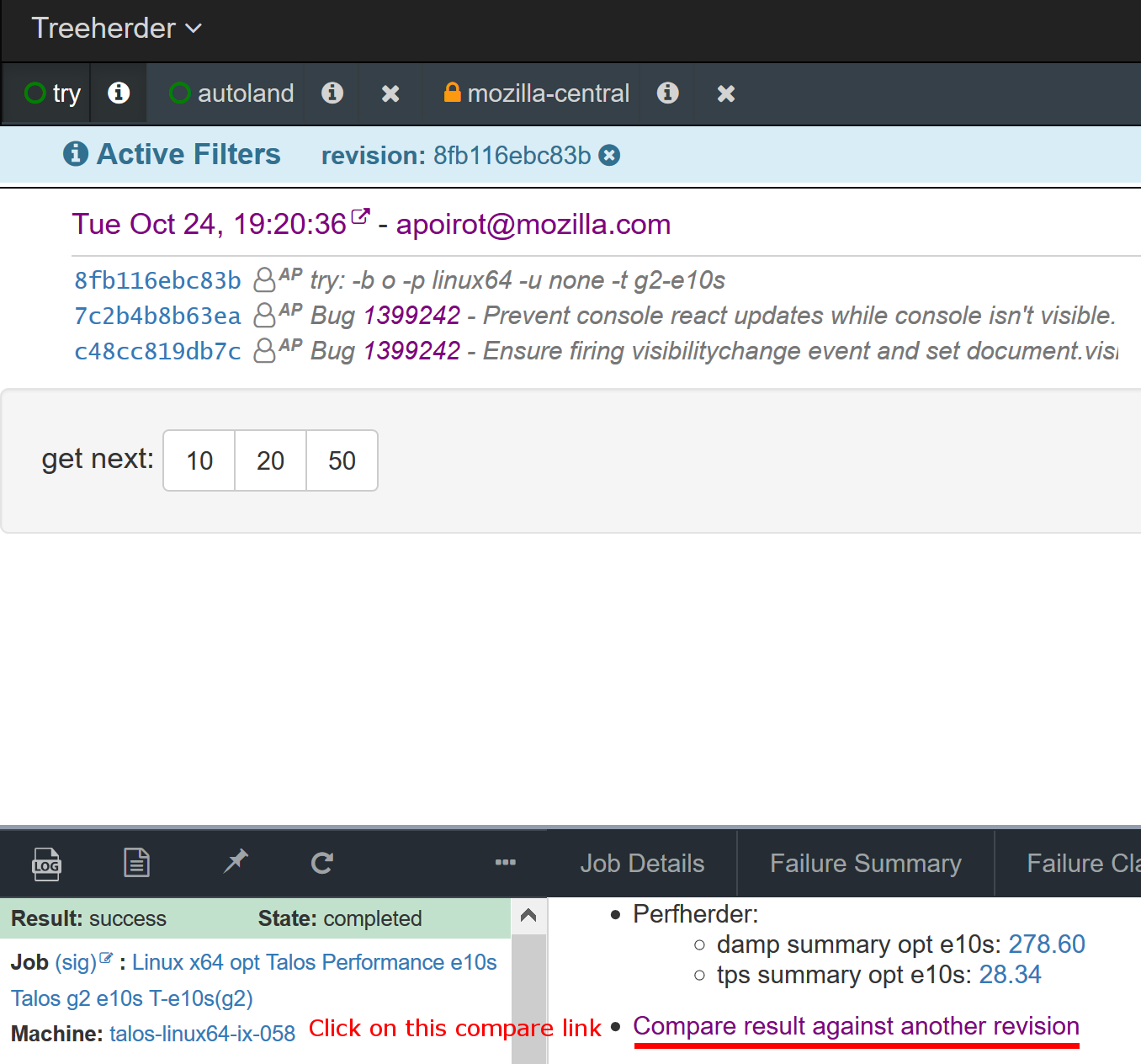 Next to “Talos” select menu, in the filter textbox, type “damp”. Under “damp opt e10s” item, mouse over the “linux64” line, click on “subtests” link. 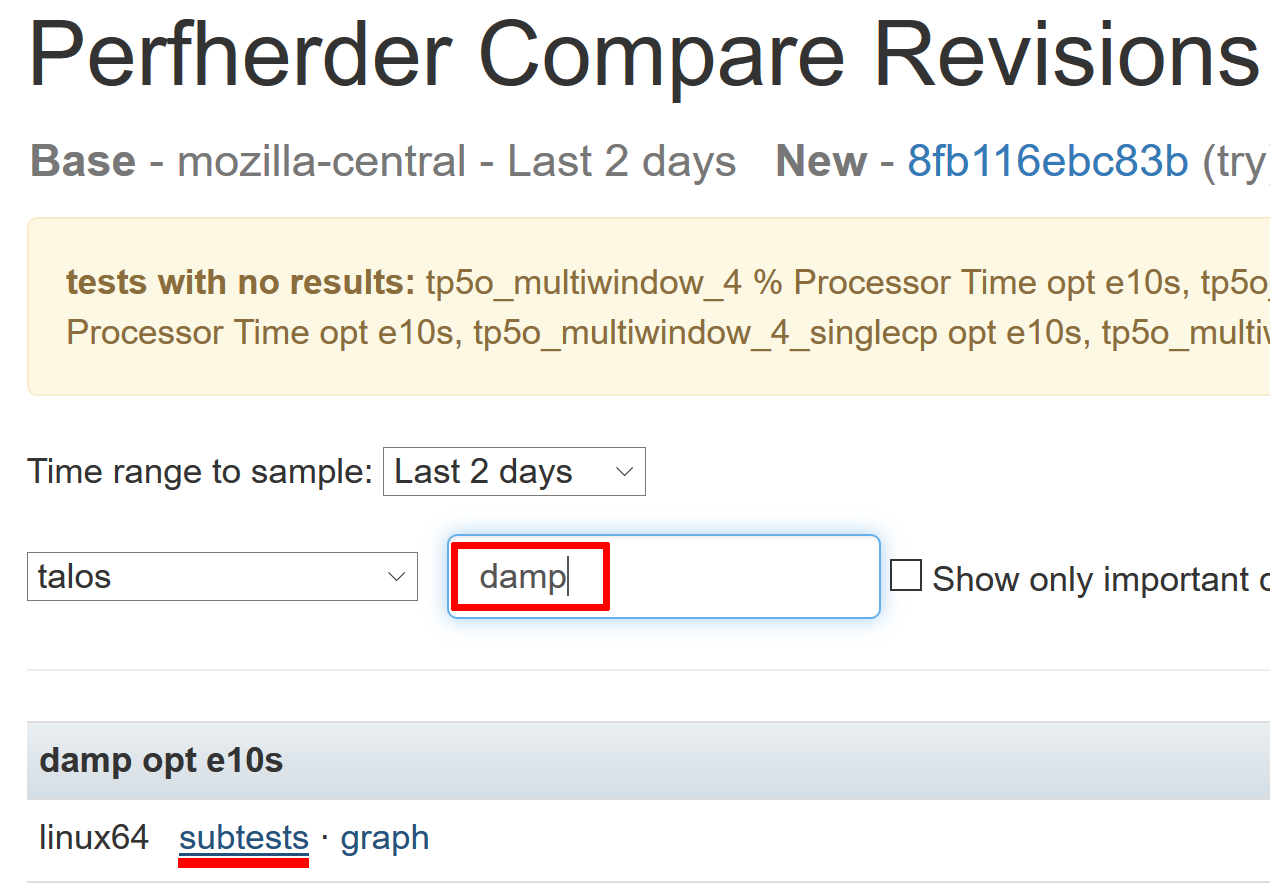 And here you get the results for each DAMP test:

On this page, you can filter by test name with the filter box on top of the result table. This table has the following columns:

There is also “Show only important changes” checkbox, which helps seeing if there is any significant regression. It will only display regressions and improvements with a medium or high confidence.

How to contribute to DAMP?¶

DAMP is based on top of a more generic test suite called Talos. Talos is a Mozilla test suite to follow all Firefox components performance. It is written in Python and here are the sources in mozilla-central. Compared to the other test suites, it isn’t run on the cloud, but on dedicated hardware. This is to ensure performance numbers are stable over time and between two runs. Talos runs various types of tests. More specifically, DAMP is a Page loader test. The source code for DAMP is also in mozilla-central. See Writing new performance test for more information about the implementation of DAMP tests.

How to see the performance trends?¶

You can find the dedicated performance dashboard for DevTools at http://firefox-dev.tools/performance-dashboard. You will find links to trend charts for various tools:

Each tool page displays charts for all the subtests relevant for a given panel.

Each circle on the chart is a push to mozilla-central. You can hover on a circle to see some additional information about the push, such as the date, the performance impact for the subtest, and the push id. Clicking on a circle will take you to the pushlog.

Colored circles indicate that the push contains a change that was identified as having a performance impact. Those can be categorized as:

This data is synchronized from a shared Google doc.

There is a PerfHerder link on each chart that will take you to the PerfHerder page corresponding to this subtest.

On PerfHerder charts, each circle is a push on mozilla-central. When you see a spike or a drop, you can try to identify the patch that relates to it by clicking the circles. It will show a black popup. Then click on the changeset hash like “cb717386aec8” and you will get a mercurial changelog. Then it is up to you to read the changelog and see which changeset may have hit the performance.

For example, open this page. This is tracking inspector opening performance against the “Simple” page. 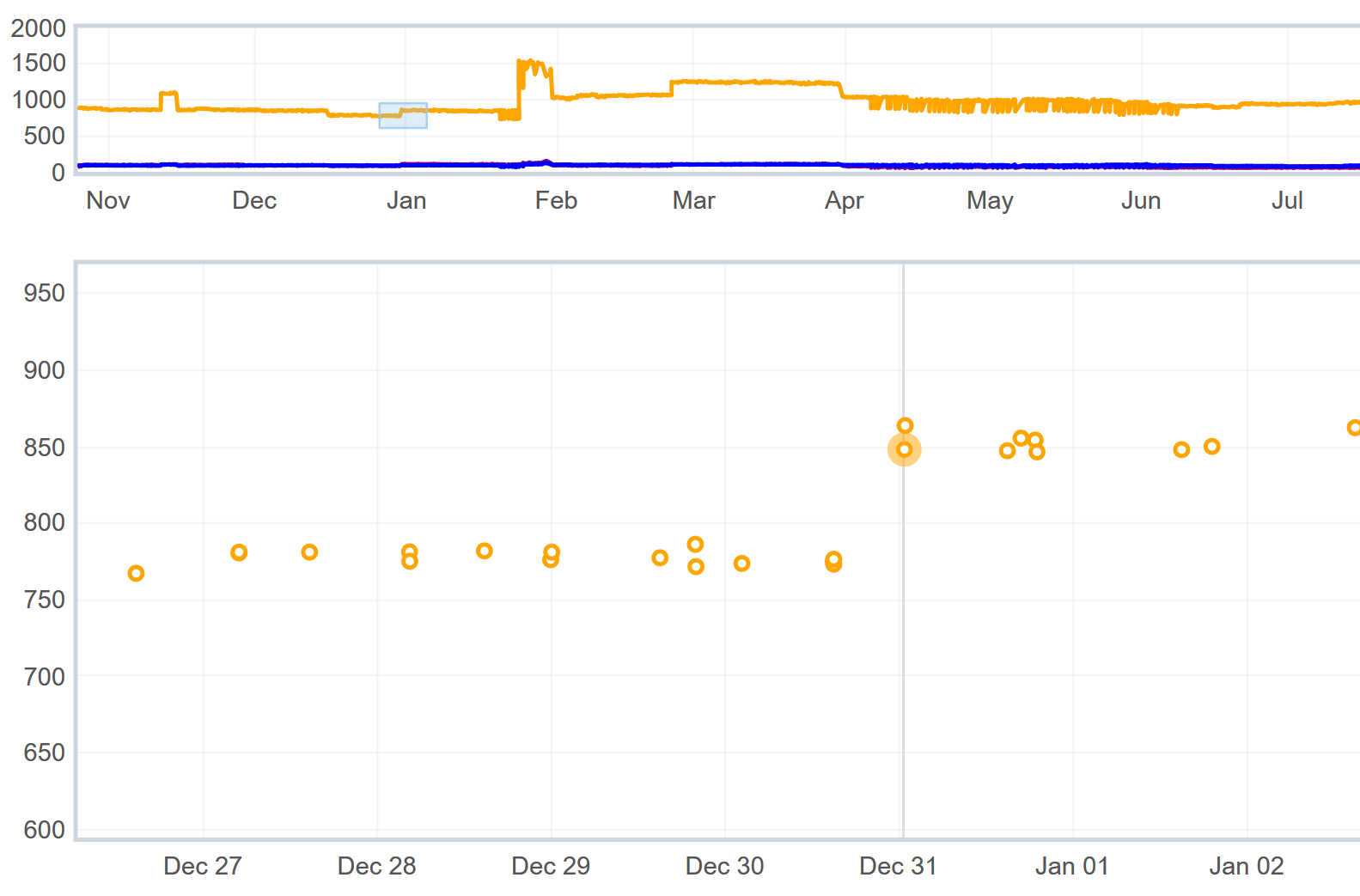 See the regression on Dec 31th? Now, click on the first yellow circle of this spike. You will get a black popup like this one: 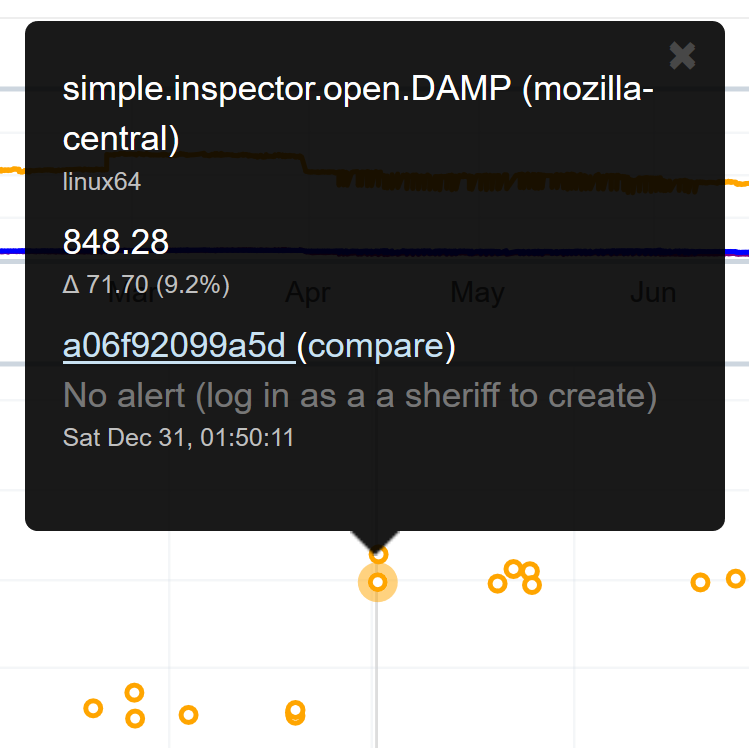 Click on the changelog link to see which changesets were added during this run. Here, you will see that the regression comes from these patches: