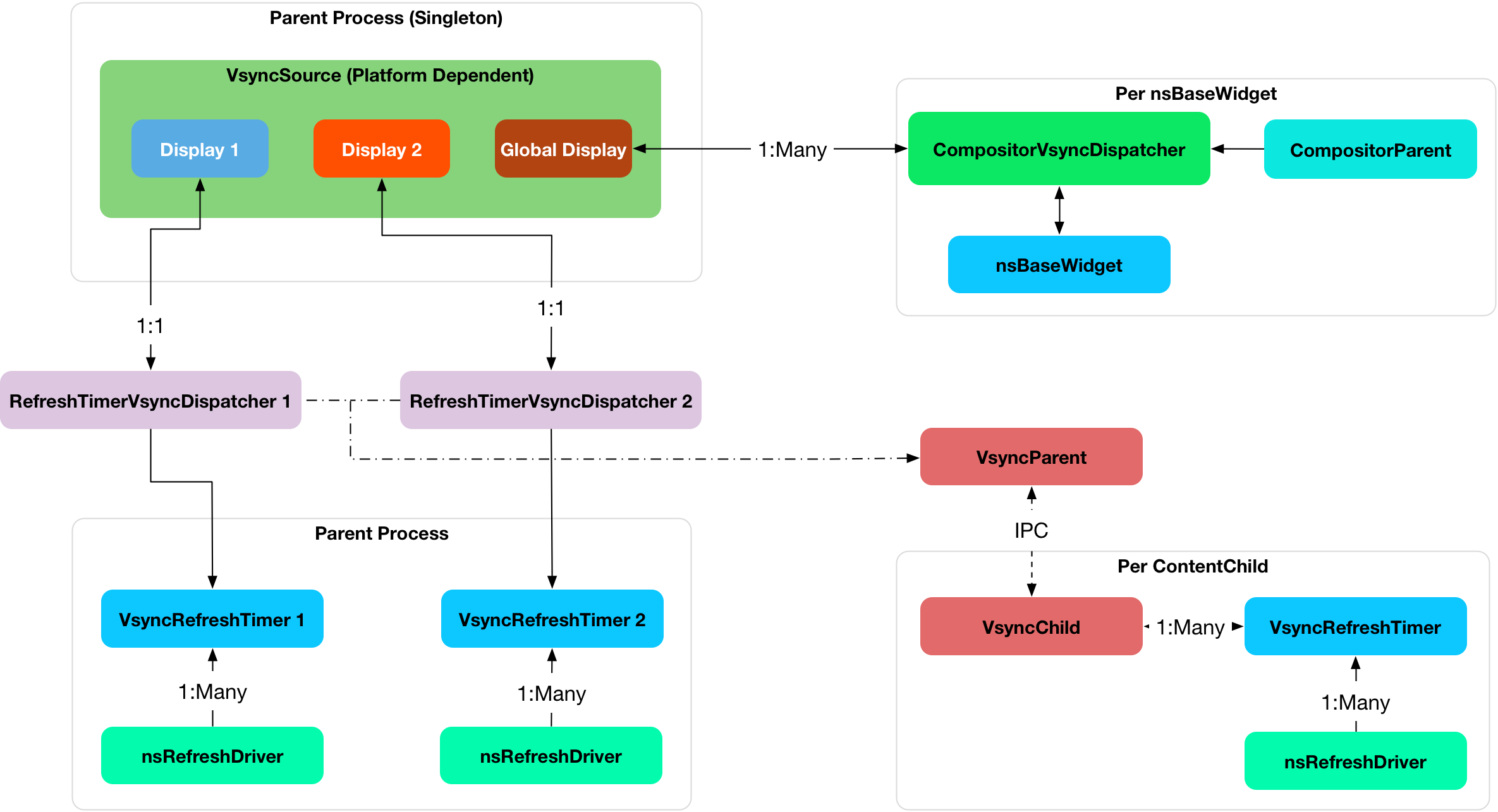 Our current architecture is to align three components to hardware vsync timers:

The flow of our rendering engine is as follows:

Hardware vsync events from (1), occur on a specific Display Object. The Display object is responsible for enabling / disabling vsync on a per connected display basis. For example, if two monitors are connected, two Display objects will be created, each listening to vsync events for their respective displays. We require one Display object per monitor as each monitor may have different vsync rates. As a fallback solution, we have one global Display object that can synchronize across all connected displays. The global Display is useful if a window is positioned halfway between the two monitors. Each platform will have to implement a specific Display object to hook and listen to vsync events. As of this writing, both Firefox OS and OS X create their own hardware specific Hardware Vsync Thread that executes after a vsync has occurred. OS X creates one Hardware Vsync Thread per CVDisplayLinkRef. We do not currently support multiple displays, so we use one global CVDisplayLinkRef that works across all active displays. On Windows, we have to create a new platform thread that waits for DwmFlush(), which works across all active displays. Once the thread wakes up from DwmFlush(), the actual vsync timestamp is retrieved from DwmGetCompositionTimingInfo(), which is the timestamp that is actually passed into the compositor and refresh driver.

One large goal of Silk is to align touch events with vsync events. On Firefox OS, touchscreens often have different touch scan rates than the display refreshes. A Flame device has a touch refresh rate of 75 HZ, while a Nexus 4 has a touch refresh rate of 100 HZ, while the device’s display refresh rate is 60HZ. When a vsync event occurs, we resample touch events, and then dispatch the resampled touch event to APZ. Touch events on Firefox OS occur on a Touch Input Thread whereas they are processed by APZ on the APZ Controller Thread. We use Google Android’s touch resampling algorithm to resample touch events.

With Content processes, the start up process is more complicated. We send vsync IPC messages via the use of the PBackground thread on the parent process, which allows us to send messages from the Parent process’ without waiting on the main thread. This sends messages from the Parent::PBackground Thread to the Child::Main Thread. The main thread receiving IPC messages on the content process is acceptable because RefreshDrivers must execute on the main thread. However, there is some amount of time required to setup the IPC connection upon process creation and during this time, the RefreshDrivers must tick to set up the process. To get around this, we initially use software RefreshTimers that already exist during content process startup and swap in the VsyncRefreshTimer once the IPC connection is created.

Thus the overall flow during normal execution is: