Note: The power profiling overview is worth reading at this point if you haven’t already. It may make parts of this document easier to understand.

This is a built-in OS X tool that shows real-time process measurements. It is well-known and its “Energy Impact” measure is likely to be consulted by users to compare the power consumption of different programs. (Apple support documentation specifically recommends it for troubleshooting battery life problems.) Unfortunately “Energy Impact” is not a good measure for either users or software developers and it should be avoided. Activity Monitor can still be useful, however.

Activity Monitor has several tabs. They can all be customized to show any of the available measurements (by right-clicking on the column strip) but only the “Energy” tab groups child processes with parent processes, which is useful, so it’s the best one to use. The following screenshot shows a customized “Energy” tab. 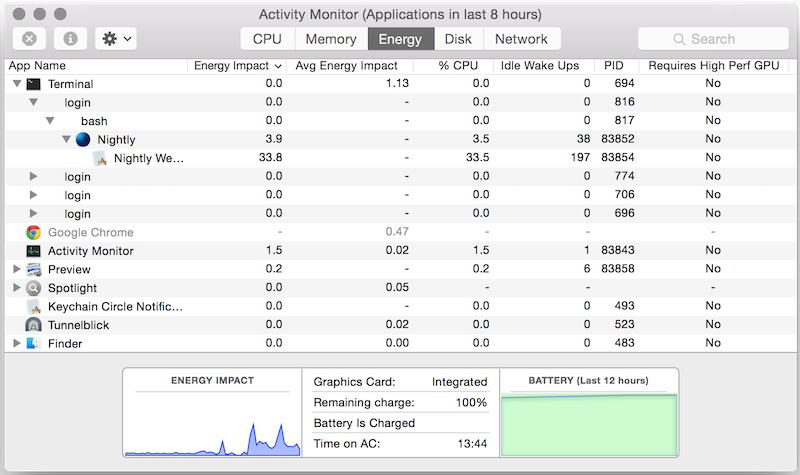 The power-related columns are as follows.

Activity Monitor can be useful for cursory measurements, but for more precise and detailed measurements other tools such as powermetrics are better.

What does “Energy Impact” measure?¶

“Energy Impact” is a hybrid proxy measure of power consumption. Careful investigation indicates that on Mac OS 10.10 and 10.11 it is computed with a formula that is machine model-specific, and includes the following factors: CPU usage, wakeup frequency, quality of service class usage, and disk, GPU, and network activity. The weightings of each factor can be found in one of the the files in /usr/share/pmenergy/Mac-<id>.plist, where <id> can be determined with the following command.

In contrast, on Mac OS 10.9 it is computed via a simpler machine model-independent formula that only factors in CPU usage and wakeup frequency.

In both cases “Energy Impact” often correlates poorly with actual power consumption and should be avoided in favour of direct measurements that have clear physical meanings.

What does “Average Energy Impact” measure?¶

systemstats is a program that runs continuously and periodically measures, among other things, CPU usage and idle wakeups for each running process. Tests indicate that it is almost certainly using the same “Energy Impact” formula to compute the “Average Energy Impact”, using measurements from the past 8 hours of wake time (i.e. if a laptop is closed for several hours and then reopened, those hours are not included in the calculation.)

When you click on the battery icon in the OS X menu bar you get a drop-down menu that includes a list of “Apps Using Significant Energy”. This is crude but prominent, and therefore worth understanding — even though it’s not much use for profiling applications. 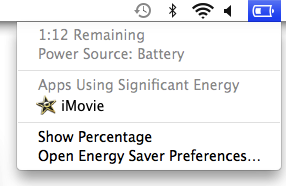 When you open this menu for the first time in a while it says “Collecting Power Usage Information” for a few seconds, and if you have top open during that time you’ll see that, once again, systemstats is running and using a lot of CPU. Furthermore, if you click on an application name in the menu Activity Monitor will be opened and that application’s entry will be highlighted. Based on these facts it seems reasonable to assume that “Energy Impact” is again being used to determine which applications are “using significant energy”.

Testing shows that once an energy-intensive application is started it takes less than a minute for it to show up in the battery status menu. And once the application stops using high amounts of energy it takes a few minutes to disappear. The exception is when the application is closed, in which case it disappears immediately. And it appears that a program with an “Energy Impact” of roughly 20 or more will eventually show up as significant, and programs that have much higher “Energy Impact” values tend to show up more quickly.

top is similar to Activity Monitor, but is a command-line utility. To see power-related measurements, invoke it as follows.

Note: -a and -e can be used instead of -d to get different counting modes. See the man page for details.

top is unlikely to be much use for power profiling.