This page provides an overview of the script security architecture in Gecko.

Like any web browser, Gecko can load JavaScript from untrusted and potentially hostile web pages and run it on the user’s computer. The security model for web content is based on the same-origin policy, in which code gets full access to objects from its origin but highly restricted access to objects from a different origin. The rules for determining whether an object is same-origin with another, and what access is allowed cross-origin, are now mostly standardized across browsers.

Gecko has an additional problem, though: while its core is written in C++, the front-end code is written in JavaScript. This JavaScript code, which is commonly referred to as chrome code, runs with system privileges. If the code is compromised, the attacker can take over the user’s computer. Legacy SDK extensions also run with chrome privileges.

Having the browser front end in JavaScript has benefits: it can be much quicker to develop in JavaScript than in C++, and contributors do not need to learn C++. However, JavaScript is a highly dynamic, malleable language, and without help it’s difficult to write system-privileged code that interacts safely with untrusted web content. From the point of view of chrome code, the script security model in Gecko is intended to provide that help to make writing secure, system-privileged JavaScript a realistic expectation.

Compartments are the foundation for Gecko’s script security architecture. A compartment is a specific, separate area of memory. In Gecko, there’s a separate compartment for every global object. This means that each global object and the objects associated with it live in their own region of memory. 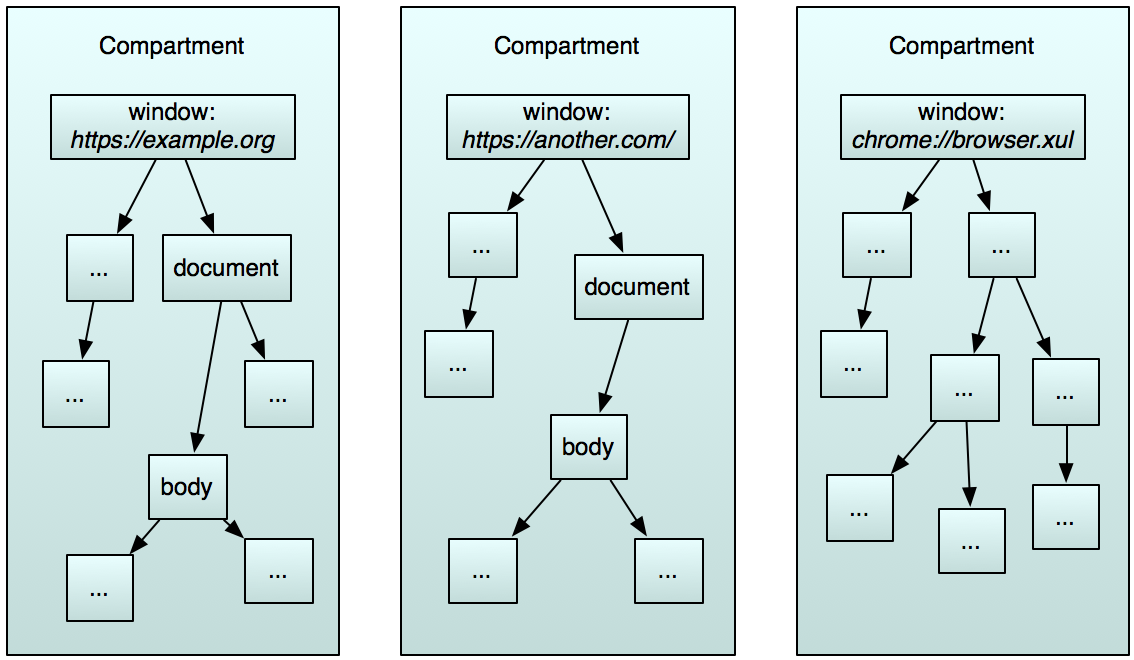 Normal content windows are globals, of course, but so are chrome windows, sandboxes, workers, the ContentFrameMessageManager in a frame script, and so on. 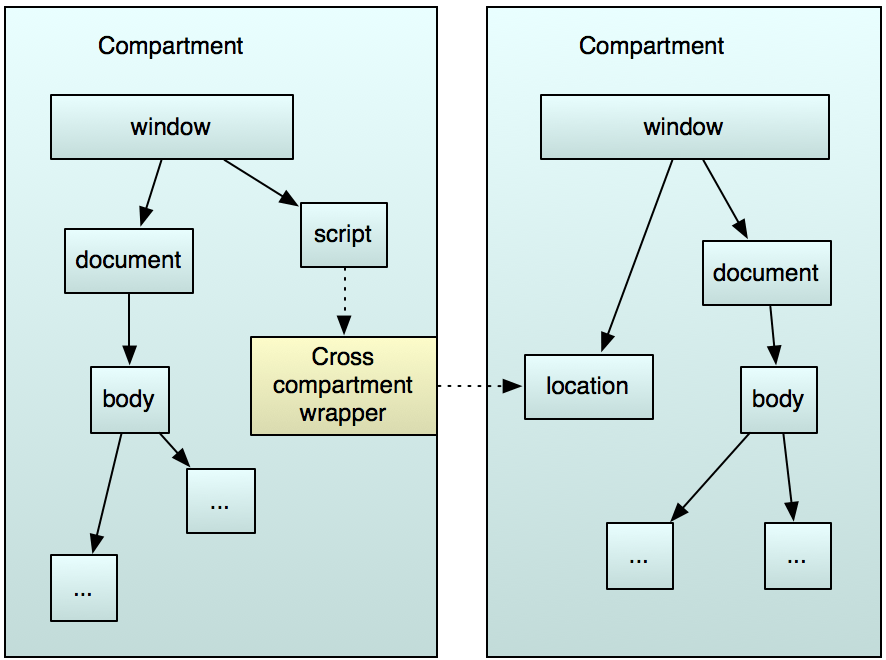 Inside the same compartment, all objects share a global and are therefore same-origin with each other. Therefore there’s no need for any security checks, there are no wrappers, and there is no performance overhead for the common case of objects in a single window interacting with each other.

Whenever cross-compartment access happens, the wrappers enable us to implement the appropriate security policy. Because the wrapper we choose is specific to the relationship between the two compartments, the security policy it implements can be static: when the caller uses the wrapper, there’s no need to check who is making the call or where it is going.

As we’ve already seen, the most common scenario for same-origin access is when objects belonging to the same window object interact. This all takes place within the same compartment, with no need for security checks or wrappers.

When objects share an origin but not a global - for example two web pages from the same protocol, port, and domain - they belong to two different compartments, and the caller gets a transparent wrapper to the target object. 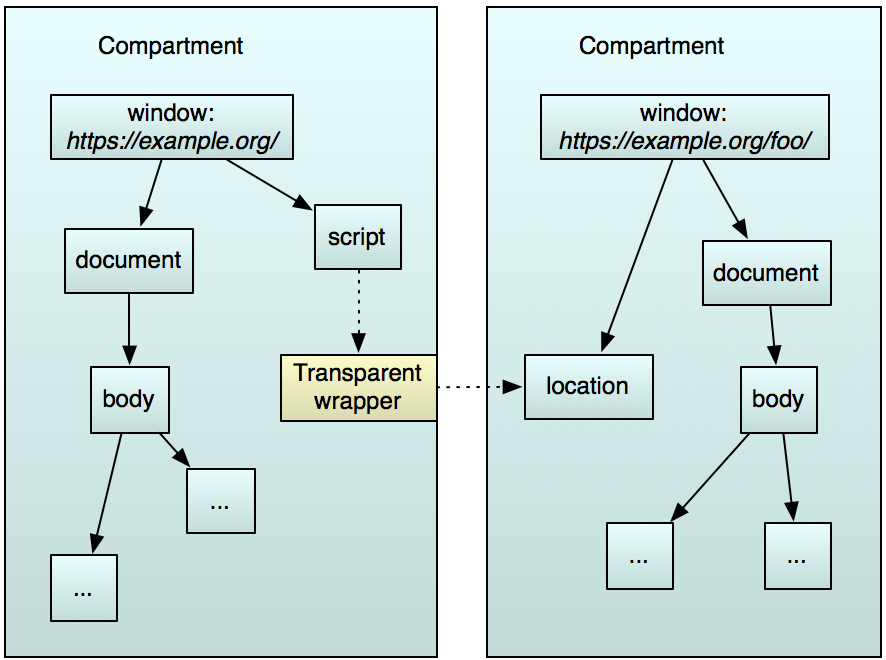 Transparent wrappers allow access to all the target’s properties: functionally, it’s as if the target is in the caller’s compartment. 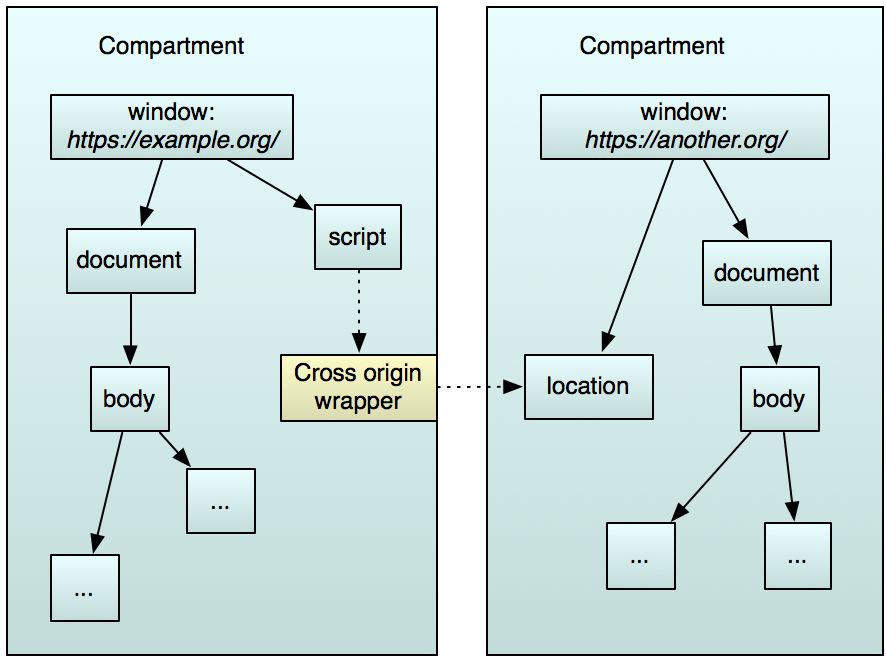 This denies access to all the object’s properties, except for a few properties of Window and Location objects, as defined by the same-origin policy.

The most obvious example of this kind of security relation is between system-privileged chrome code and untrusted web content, but there are other examples in Gecko. The Add-on SDK runs content scripts in sandboxes, which are initialized with an expanded principal, giving them elevated privileges with respect to the web content they operate on, but reduced privileges with respect to chrome.

If the caller has a higher privilege than the target object, the caller gets an Xray wrapper for the object. 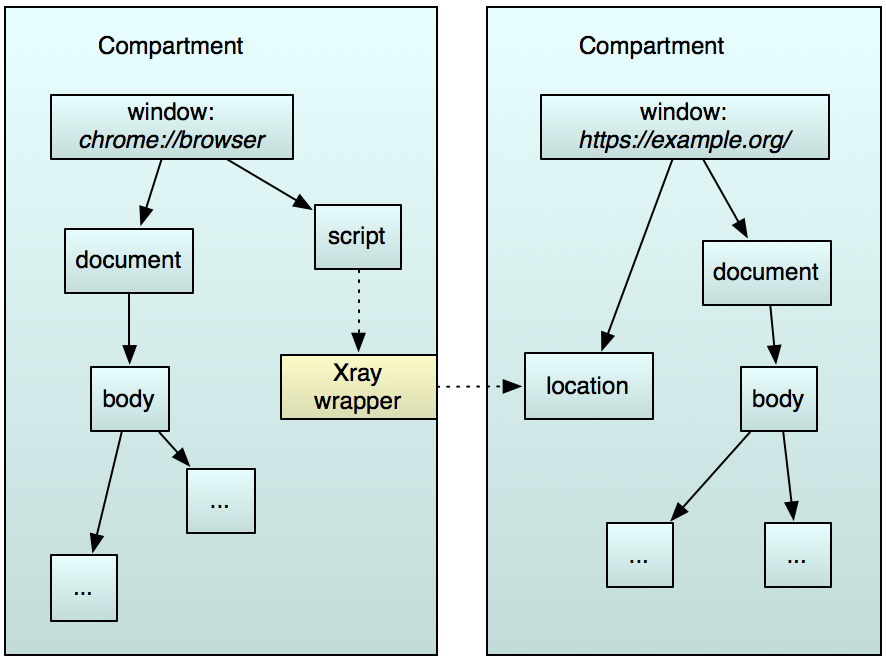 Xrays are designed to prevent untrusted code from confusing trusted code by redefining objects in unexpected ways. For example, privileged code using an Xray to a DOM object sees only the original version of the DOM object. Any expando properties are not visible, and if any native DOM properties have been redefined, they are not visible in the Xray.

The privileged code is able to waive Xrays if it wants unfiltered access to the untrusted object.

See Xray vision for much more information on Xrays.

If the caller has lower privileges than the target object, then the caller gets an opaque wrapper. 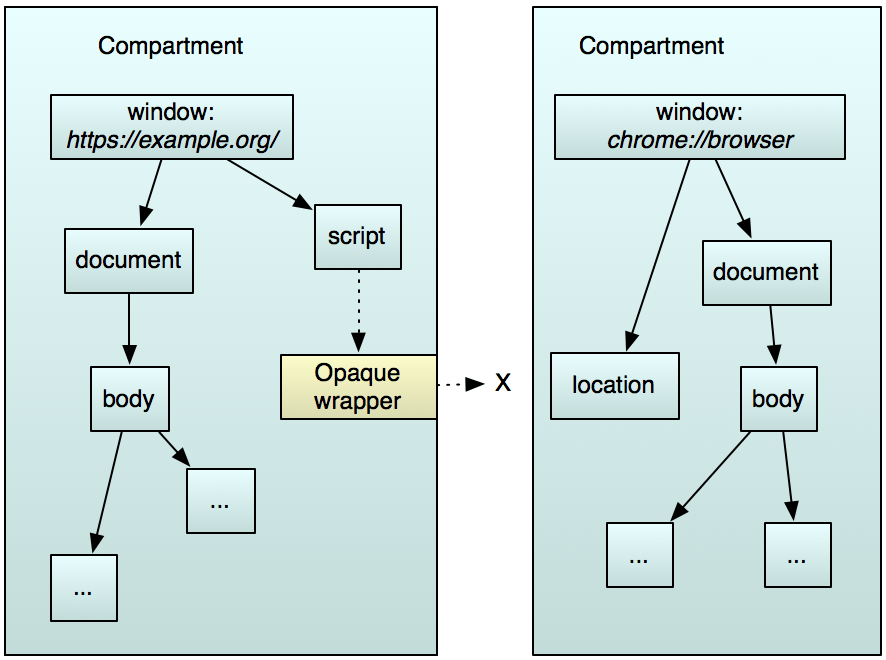 An opaque wrapper denies all access to the target object.

There are four types of security principal: the system principal, content principals, expanded principals, and the null principal.

An expanded principal is specified as an array of origins:

This also enables the script security model to treat compartments that have expanded principals more like part of the browser than like web content. This means, for example, that it can run when JavaScript is disabled for web content.

The null principal fails almost all security checks. It has no privileges and can’t be accessed by anything but itself and chrome. It subsumes no other principals, even other null principals. (This is what is used when HTML5 and other specs say “origin is a globally unique identifier”.)

The diagram below summarizes the relationships between the different principals. The arrow connecting principals A and B means “A subsumes B”.  (A is the start of the arrow, and B is the end.) 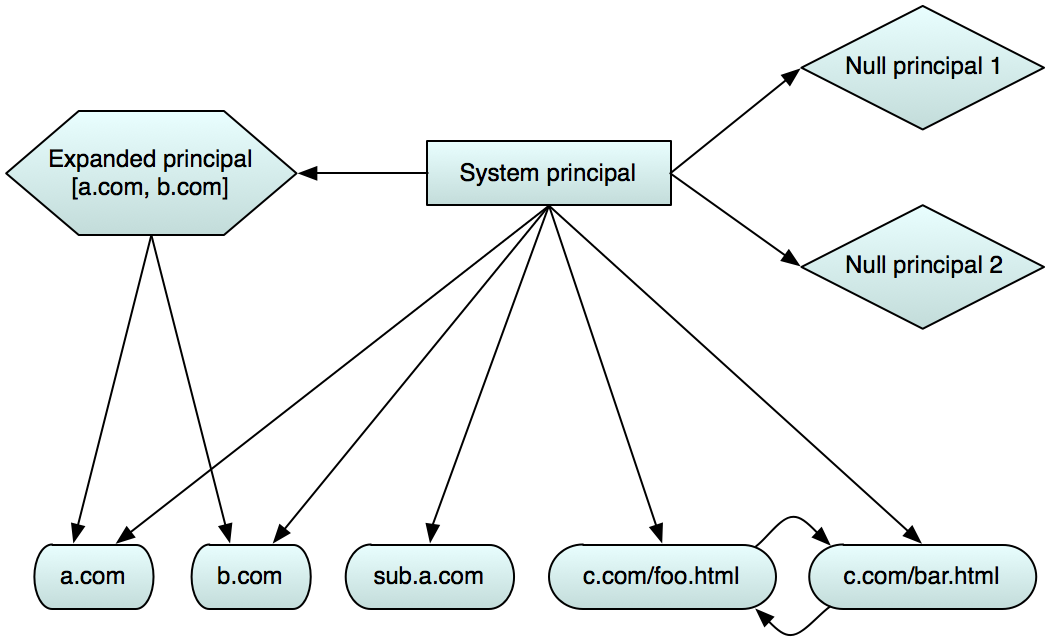 The following diagram shows the factors that determine the kind of wrapper that compartment A would get when trying to access an object in compartment B. 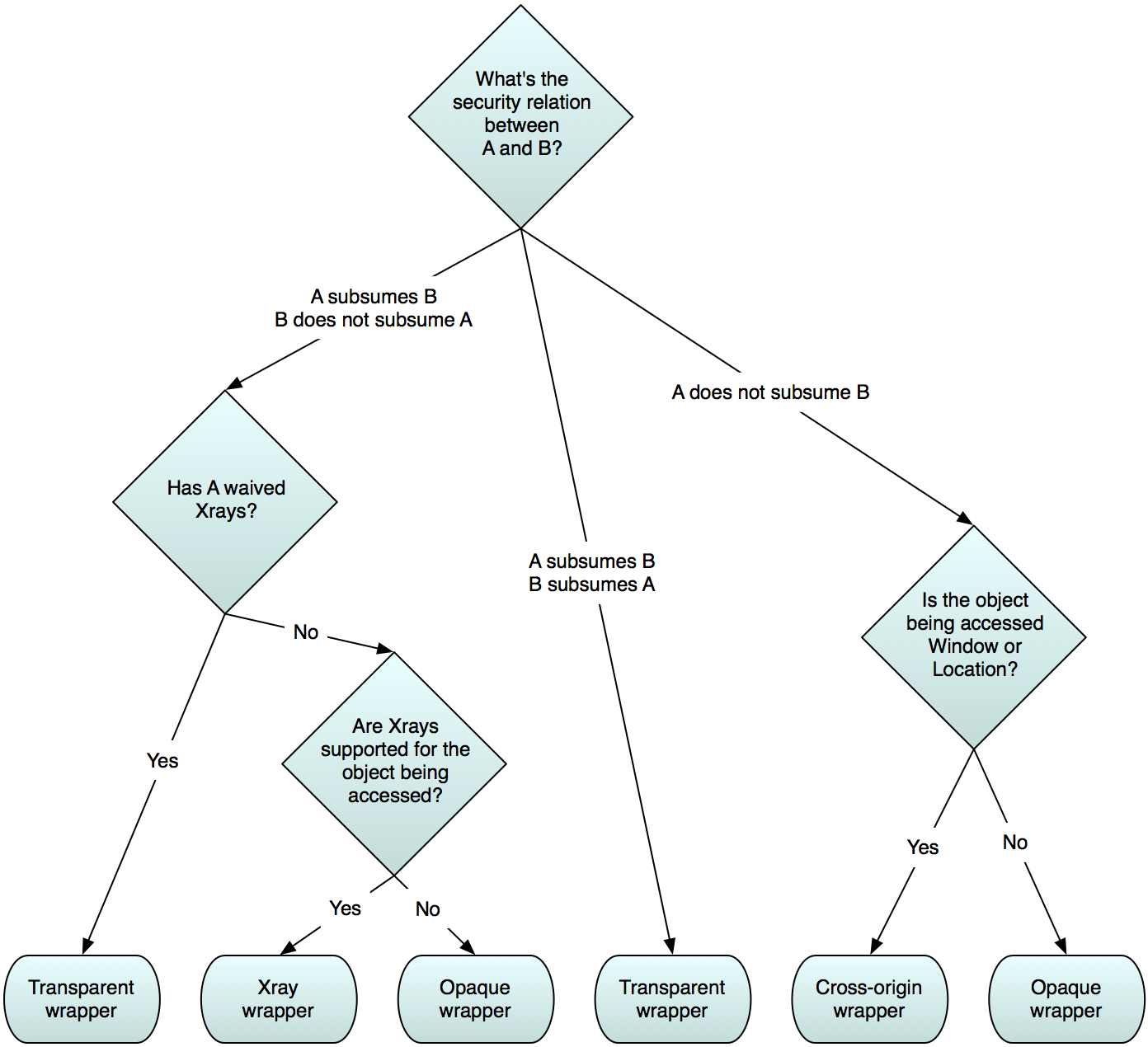