In the Fission world, the preferred method of communication between between things-that-may-live-in-a-different-process are JSActors.

At the time of this writing, Fission offers the following JSActors:

A JSProcess pair (see below) is the preferred method of communication between a child process and its parent process.

In the Fission world, JSProcessActors are the replacement for e10s-era process scripts.

The pair is instantiated lazily, upon the first call to getActor(“MyActor”) (see below). Note that if a parent process has several children, the parent process will typically host several instances of MyActorParent whereas the children will each host a single instance of MyActorChild.

The pair dies when the child process dies.

Note that the names MyActorChild and MyActorParent are meaningful – suffixes Child and Parent are how getActor(…) finds the correct classes to load within the JS code.

A JSWindowActor pair (see below) is the preferred method of communication between a frame and its parent, regardless of whether the frame and parent live in the same process or in distinct processes.

In the Fission world, JSWindowActors are the replacement for framescripts. Framescripts were how we structured code to be aware of the parent (UI) and child (content) separation, including establishing the communication channel between the two (via the Frame Message Manager).

However, the framescripts had no way to establish further process separation downwards (that is, for out-of-process iframes). JSWindowActors will be the replacement.

Currently, in the post Electrolysis Project Firefox codebase, we have code living in the parent process (UI) that is in plain JS (.js files) or in JS modules (.jsm files). In the child process (hosting the content), we use framescripts (.js) and also JS modules. The framescripts are instantiated once per top-level frame (or, in simpler terms, once per tab). This code has access to all of the DOM from the web content, including all iframes within it. 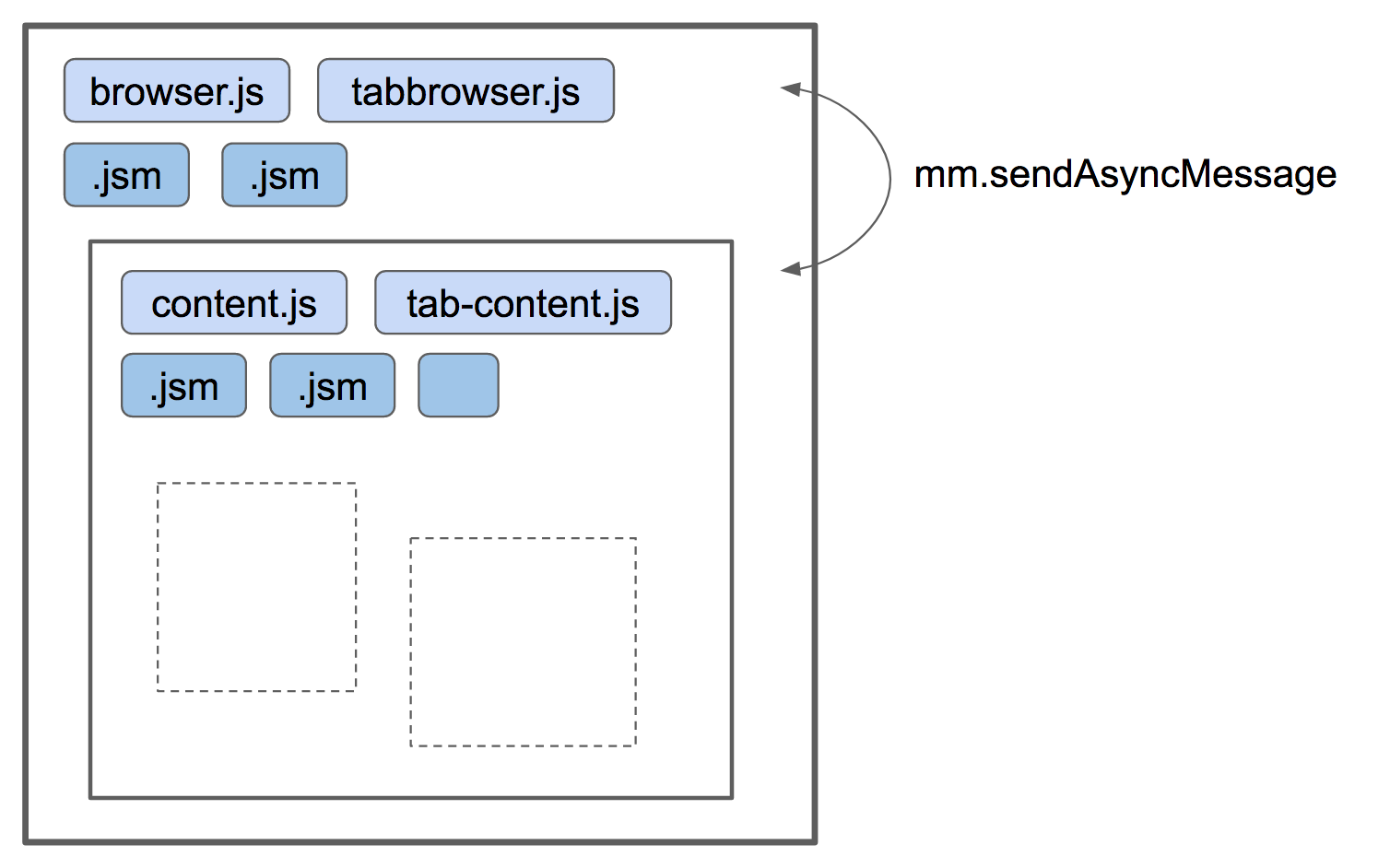 The JSWindowActor mechanism is similar to how IPC Actors work in the native layer of Firefox:

If in the previously mentioned DOM hierarchy, one of the <iframe>’s unload, any associated JSWindowActor pairs will be torn down.

JSWindowActors are “managed” by the WindowGlobal IPC Actors, and are implemented as JS classes (subclasses of JSWindowActorParent and JSWindowActorChild) instantiated when requested for any particular window. Like the Frame Message Manager, they are ultimately using IPC Actors to communicate under the hood. 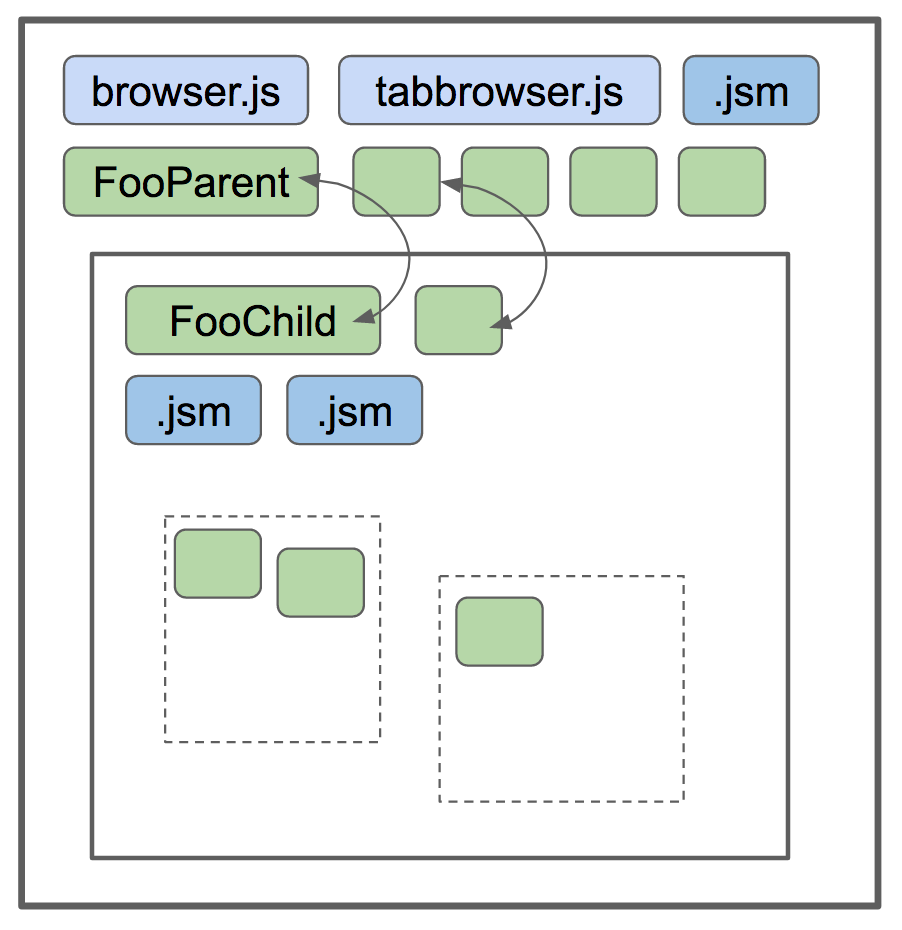 The JSActor base class exposes two methods for sending messages. Both methods are asynchronous. There is no way to send messages synchronously with JSActor.

Where value is anything that can be serialized using the structured clone algorithm. Additionally, a nsIPrincipal can be sent without having to manually serializing and deserializing it.

sendQuery improves upon sendAsyncMessage by returning a Promise. The receiver of the message must then return a Promise that can eventually resolve into a value - at which time the sendQuery Promise resolves with that value.

The sendQuery method arguments follow the same conventions as sendAsyncMessage, with the second argument being a structured clone.

To receive messages, you need to implement

The method receives a single argument, which is the de-serialized arguments that were sent via either sendAsyncMessage or sendQuery.

If receiveMessage is responding to a sendQuery, it MUST return a Promise for that message.

Using sendQuery, and the receiveMessage is able to return a value right away? Try using Promise.resolve(value); to return value, or you could also make your receiveMessage method an async function, presuming none of the other messages it handles need to get a non-Promise return value.

Other methods that can be overridden¶

If there’s something you need to do as soon as the JSActor is instantiated, the constructor function is a great place to do that.

At this point the infrastructure for sending messages is not ready yet and objects such as manager or browsingContext are not available.

If you register your Actor to listen for nsIObserver notifications, implement an observe method with the above signature to handle the notification.

If you register your Actor to listen for content events, implement a handleEvent method with the above signature to handle the event.

Only JSWindowActors can register to listen for content events.

This method is called immediately after a child actor is created and initialized. Unlike the actor’s constructor, it is possible to do things like access the actor’s content window and send messages from this callback.

This is another point to clean-up an Actor before it is destroyed, but at this point, no communication is possible with the other side.

Other things exposed on a JSWindowActorParent¶

Other things exposed on a JSWindowActorChild¶

A number of helpful getters exist on a JSWindowActorChild, including:

The currently loaded document in the frame associated with this JSWindowActorChild.

The outer window for the frame associated with this JSWindowActorChild.

How to port from message manager and framescripts to JSWindowActors¶

While the JSWindowActor mechanism was being designed and developed, large sections of our framescripts were converted to an “actor style” pattern to make eventual porting to JSWindowActors easier. These Actors use the Message Manager under the hood, but made it much easier to shrink our framescripts, and also allowed us to gain significant memory savings by having the actors be lazily instantiated.

You can find the list of Message Manager Actors (or “Legacy Actors”) in BrowserGlue.sys.mjs and ActorManagerParent.sys.mjs, in the LEGACY_ACTORS lists.

The split in Message Manager Actors defined between BrowserGlue and ActorManagerParent is mainly to keep Firefox Desktop specific Actors separate from Actors that can (in theory) be instantiated for non-Desktop browsers (like Fennec and GeckoView-based browsers). Firefox Desktop-specific Actors should be registered in BrowserGlue. Shared “toolkit” Actors should go into ActorManagerParent.

“Porting” these Actors often means doing what is necessary in order to move their registration entries from LEGACY_ACTORS to the JSWINDOWACTORS list.

Figuring out the lifetime of a new Actor pair¶

In the old model, framescript were loaded and executed as soon as possible by the top-level frame. In the JSWindowActor model, the Actors are much lazier, and only instantiate when:

Making the Actors lazy like this saves on processing time to get a frame ready to load web pages, as well as the overhead of loading the Actor into memory.

When porting a framescript to JSWindowActors, often the first question to ask is: what’s the entrypoint? At what point should the Actors instantiate and become active?

For example, when porting the content area context menu for Firefox, it was noted that the contextmenu event firing in content was a natural event to wait for to instantiate the Actor pair. Once the ContextMenuChild instantiated, the handleEvent method was used to inspect the event and prepare a message to be sent to the ContextMenuParent. This example can be found by looking at the patch for the Context Menu Fission Port.

Despite being outlawed as a way of synchronously accessing the properties of objects in other processes, CPOWs ended up being useful as a way of passing handles for DOM elements between processes.

CPOW messages, however, cannot be sent over the JSWindowActor communications pipe, so this handy mechanism will no longer work.

Instead, a new module called ContentDOMReference.sys.mjs has been created which supplies the same capability. See that file for documentation.

How to start porting parent-process browser code to use JSWindowActors¶

The Message Manager Actors work made it much easier to migrate away from framescripts towards something that is similar to JSWindowActors. It did not, however, substantially change how the parent process interacted with those framescripts.

So when porting code to work with JSWindowActors, we find that this is often where the time goes - refactoring the parent process browser code to accommodate the new JSWindowActor model.

Usually, the first thing to do is to find a reasonable name for your actor pair, and get them registered (see Using ContentDOMReference instead of CPOWs), even if the actors implementations themselves are nothing but unmodified subclasses of JSWindowActorParent and JSWindowActorChild.

Next, it’s often helpful to find and note all of the places where sendAsyncMessage is being used to send messages through the old message manager interface for the component you’re porting, and where any messages listeners are defined.

Let’s look at a hypothetical example. Suppose we’re porting part of the Page Info dialog, which scans each frame for useful information to display in the dialog. Given a chunk of code like this:

If a PageInfo pair of JSWindowActor’s is registered, it might be tempting to simply replace the first part with:

However, if any of the frames on the page are running in their own process, they’re not going to receive that PageInfo:getInfoFromAllFrames message. Instead, in this case, we should walk the BrowsingContext tree, and instantiate a PageInfo actor for each global, and send one message each to get information for each frame. Perhaps something like this:

The original "PageInfo:info" message listener will need to be updated, too. Any responses from the PageInfoChild actor will end up being passed to the receiveMessage method of the PageInfoParent actor. It will be necessary to pass that information along to the interested party (in this case, the dialog code which is showing the table of interesting Page Info).

It might be necessary to refactor or rearchitect the original senders and consumers of message manager messages in order to accommodate the JSWindowActor model. Sometimes it’s also helpful to have a singleton management object that manages all JSWindowActorParent instances and does something with their results.

It’s not a good idea to store any state within a JSWindowActorChild that you want to last beyond the lifetime of its BrowsingContext. An out-of-process <iframe> can be closed at any time, and if it’s the only one for a particular content process, that content process will soon be shut down, and any state you may have stored there will go away.

Your best bet for storing state is in the parent process.

If each individual frame needs state, consider using a WeakMap in the parent process, mapping CanonicalBrowsingContext’s with that state. That way, if the associates frames ever go away, you don’t have to do any cleaning up yourself.

ChromeUtils exposes an API for registering actors, but both BrowserGlue and ActorManagerParent are the main entry points where the registration occurs. If you want to register an actor, you should add it either to JSPROCESSACTORS or JSWINDOWACTORS in either of those two files.

In the JS*ACTORS objects, each key is the name of the actor pair (example: ContextMenu), and the associated value is an Object of registration parameters.

The full list of registration parameters can be found:

This example is for the JSWindowActor implementation of crash reporting for GMP.

Here, we’re declaring that class PluginParent (here, a subclass of JSWindowActorParent) is defined and exported from module PluginParent.jsm. That’s all we have to say for the parent (main process) side of things.

It’s not sufficient to just add a new .jsm file to the actors subdirectories. You also need to update the moz.build files in the same directory to get the resource:// linkages set up correctly.

Let’s look at the second chunk:

We’re similarly declaring where the PluginChild subclassing JSWindowActorChild can be found.

Next, we declare the content events which, when fired in a window, will cause the JSWindowActorChild to instantiate if it doesn’t already exist, and then have handleEvent called on the PluginChild instance. For each event name, an Object of event listener options can be passed. You can use the same event listener options as accepted by addEventListener. If an event listener has no useful effect when the actor hasn’t been created yet, createActor: false may also be specified to avoid creating the actor when not needed.

A few things worth bearing in mind when adding your own actor registration:

Get a JS window actor for a specific window

Get a JS process actor for a specific process