In Firefox, the Telemetry system collects various measures of Firefox performance, hardware, usage and customizations and submits it to Mozilla. The Telemetry data collected by a single client can be examined from the integrated about:telemetry browser page, while the aggregated reports across entire user populations are publicly available at telemetry.mozilla.org.

The following sections explain how to add a new measurement to Telemetry.

Telemetry histograms are an efficient way to collect numeric measurements like multiple counts or timings. They are collected through a common API and automatically submitted with the main ping.

Before adding a new histogram, you should consider using other collection mechanisms. For example, if the need is to track a single scalar value (e.g. number, boolean or string), you should use Scalars.

The histogram below is taken from Firefox’s about:telemetry page. It shows a histogram used for tracking plugin shutdown times and the data collected over a single Firefox session. The timing data is grouped into buckets where the height of the blue bars represents the number of items in each bucket. The tallest bar, for example, indicates that there were 63 plugin shutdowns lasting between 129ms and 204ms. 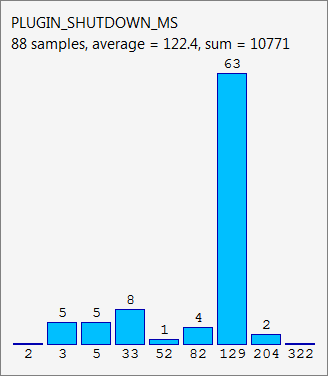 The first step to adding a new histogram is to choose the histogram type that best represents the data being measured. The sample histogram used above is an “exponential” histogram.

Only flag and count histograms have default values. All other histograms start out empty and are only submitted if a value is recorded.

These histograms only record boolean values. Multiple boolean entries can be recorded in the same histogram during a single browsing session, e.g. if a histogram is measuring user choices in a dialog box with options “Yes” or “No”, a new boolean value is added every time the dialog is displayed.

Linear histograms are similar to enumerated histograms, except each bucket is associated with a range of values instead of a single enum value. The range of values covered by each bucket increases linearly from the previous bucket, e.g. one bucket might count the number of occurrences of values between 0 to 9, the next bucket would cover values 10-19, the next 20-29, etc. This bucket type is useful if there aren’t orders of magnitude differences between the minimum and maximum values stored in the histogram, e.g. if the values you are storing are percentages 0-100%.

If you need a linear histogram with buckets < 0, 1, 2 … N >, then you should declare an enumerated histogram. This restriction was added to prevent developers from making a common off-by-one mistake when specifying the number of buckets in a linear histogram.

Exponential histograms are similar to linear histograms but the range of values covered by each bucket increases exponentially. As an example of its use, consider the timings of an I/O operation whose duration might normally fall in the range of 0ms-50ms but extreme cases might have durations in seconds or minutes. For such measurements, you would want finer-grained bucketing in the normal range but coarser-grained bucketing for the extremely large values. An exponential histogram fits this requirement since it has “narrow” buckets near the minimum value and significantly “wider” buckets near the maximum value.

Categorical histograms are similar to enumerated histograms. However, instead of specifying n_buckets, you specify an array of strings in the labels field. From JavaScript, the label values or their indices can be passed as strings to histogram.add(). From C++ you can use AccumulateCategorical with passing a value from the corresponding Telemetry::LABEL_* enum, or, in exceptional cases the string values.

This histogram type is intended for storing “enum” values, when you can’t specify labels and thus cannot use categorical histograms. An enumerated histogram consists of a fixed number of buckets (specified by n_values), each of which is associated with a consecutive integer value (the bucket’s label), 0 to n_values. Each bucket corresponds to an enum value and counts the number of times its particular enum value was recorded; except for the n_values bucket, which counts all values greater than or equal to n_values.

You might use this type of histogram if, for example, you wanted to track the relative popularity of SSL handshake types. Whenever the browser started an SSL handshake, it would record one of a limited number of enum values which uniquely identifies the handshake type.

Set n_values to a slightly larger value than needed to allow for new enum values in the future. See Changing a histogram if you need to add more enums later.

This histogram type allows you to record a single value (0 or 1, default 0). This type is useful if you need to track whether a feature was ever used during a Firefox session. You only need to add a single line of code which sets the flag when the feature is used because the histogram is initialized with a default value of 0/false (flag not set). Thus, recording a value of 0 is not allowed and asserts.

This histogram type is used when you want to record a count of something. It only stores a single value and defaults to 0.

Keyed histograms are collections of one of the histogram types above, indexed by a string key. This is for example useful when you want to break down certain counts by a name, like how often searches happen with which search engine. Note that when you need to record for a small set of known keys, using separate plain histograms is more efficient.

Keyed histograms are currently not supported in the histogram change detector.

Histograms should be declared in the Histograms.json file. These declarations are checked for correctness at compile time and used to generate C++ code.

The following is a sample histogram declaration from Histograms.json for a histogram named MEMORY_RESIDENT which tracks the amount of resident memory used by a process:

Histograms which track timings in milliseconds or microseconds should suffix their names with "_MS" and "_US" respectively. Flag-type histograms should have the suffix "_FLAG" in their name.

The possible fields in a histogram declaration are listed below.

Required. This field is a list of processes this histogram can be recorded in. Currently-supported values are:

Required. This field is a list of e-mail addresses that should be notified when the distribution of the histogram changes significantly from one build-id to the other. This can be useful to detect regressions. Note that all alerts will be sent automatically to mozilla.dev.telemetry-alerts.

Required. The version number in which the histogram expires; e.g. a value of “30” will mean that the histogram stops recording from Firefox 30 on. A version number of type "N" is automatically converted to "N.0a1" in order to expire the histogram also in the development channels. For histograms that never expire the value "never" can be used as in the example above. Accumulating data into an expired histogram is effectively a non-op and will not record anything.

Optional, boolean, defaults to false. Determines whether this is a keyed histogram.

Optional, list of strings. Only valid for keyed histograms. Defines a case sensitive list of allowed keys that can be used for this histogram. The list is limited to 30 keys with a maximum length of 20 characters. When using a key that is not in the list, the accumulation is discarded and a warning is printed to the browser console.

Optional, the default value is 1. This field represents the minimum value expected in the histogram. Note that all histograms automatically get a bucket with label 0 for counting values below the low value. If a histogram does not specify a low value, it will always have a "0" bucket (for negative or zero values) and a "1" bucket (for values between 1 and the next bucket).

The maximum value for n_buckets is 100. The more buckets, the larger the storage and transfer costs borne by our users and our pipeline.

Required for enumerated histograms. Similar to n_buckets, it represent the number of elements in the enum.

The maximum value for n_values is 100. The more values, the larger the storage and transfer costs borne by our users and our pipeline.

Required for categorical histograms. This is an array of strings which are the labels for different values in this histograms. The labels are restricted to a C++-friendly subset of characters (^[a-z][a-z0-9_]+[a-z0-9]$). This field is limited to 100 strings, each with a maximum length of 20 characters.

Required for all new histograms. This is an array of integers and should at least contain the bug number that added the probe and additionally other bug numbers that affected its behavior.

Required. A description of the data tracked by the histogram, e.g. _”Resident memory size”_

Optional. This field inserts an #ifdef directive around the histogram’s C++ declaration. This is typically used for platform-specific histograms, e.g. "cpp_guard": "ANDROID"

Optional. This field restricts recording to certain operating systems only. Use that in-place of previous cpp_guards to avoid inclusion on not-specified operating systems. Currently supported values are:

If this field is left out it defaults to all.

Optional. This is one of:

Because they are collected by default, opt-out probes need to meet a higher “user benefit” threshold than opt-in probes during data collection review.

Required. This field is a list of products this histogram can be recorded on. Currently-supported values are:

Optional. This field is a list of stores this histogram should be recorded into. If this field is left out it defaults to [main].

Changing a histogram declaration after the histogram has been released is tricky. Many tools (like the aggregator) assume histograms don’t change. The current recommended procedure is to change the name of the histogram.

The values you can accumulate to Histograms are limited by their internal representation.

Telemetry Histograms do not record negative values, instead clamping them to 0 before recording.

Telemetry Histograms do not record values greater than 2^31, instead clamping them to INT_MAX before recording.

Note that nsITelemetry.getHistogramById() will throw an NS_ERROR_FAILURE JavaScript exception if it is called with an invalid histogram ID. The add() function will not throw if it fails, instead it prints an error in the browser console.

Adding a new Telemetry probe is not possible with Artifact builds. A full build is needed.

For histograms measuring time, TelemetryStopwatch can be used to avoid working with Dates manually:

Probes in native code can also use the nsITelemetry interface, but the helper functions declared in Telemetry.h are more convenient:

The histogram names declared in Histograms.json are translated into constants in the mozilla::Telemetry namespace:

The Telemetry.h header also declares the helper classes AutoTimer and AutoCounter. Objects of these types automatically record a histogram value when they go out of scope:

Prefer using the template parameterized AutoTimer and AutoCounter on hot paths, if possible.