The fuzzy selector uses a tool called fzf. It allows you to filter down all of the task labels from a terminal based UI and an intelligent fuzzy finding algorithm. If the fzf binary is not installed, you’ll be prompted to bootstrap it on first run.

When you run mach try fuzzy an interface similar to the one below will open. This is fzf. 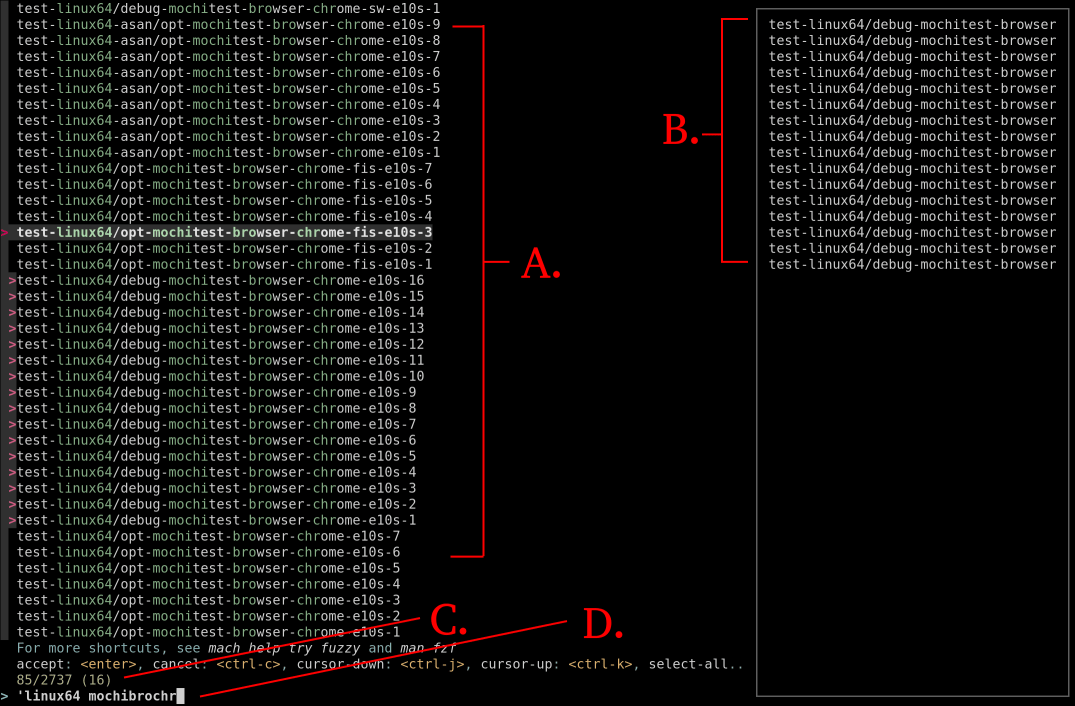 There’s a lot to unpack here, so let’s examine each component a bit more closely.

B. The set of selected tasks. These are the tasks that will be scheduled once you hit Enter. In other words, if the task you want does not appear here, it won’t be scheduled.

D. The input bar for entering queries. As you type you’ll notice the list of tasks in A starts to update immediately. In the image above, the query 'linux64 mochibrochr is entered. Correspondingly only tasks matching that query are displayed.

In general terms, you first find tasks on the left. Then you move them over to the right by selecting them. Once you are satisfied with your selection, press Enter to push to try.

There are few ways you can select tasks. If you are feeling a bit overwhelmed, it might be best to stick with the mouse to start:

Dependencies are automatically filled in, so you can select a test task without needing to select the build it depends on.

As you Right-Click, notice that a little arrow appears to the left of the task label. This indicates that the task is selected and exists in the preview pane to the right.

Once you are a bit more comfortable with the interface, using the keyboard is much better at quickly selecting tasks. Here are the main shortcuts you’ll need:

The process for selecting tasks is otherwise the same as for a mouse. A particularly fast and powerful way to select tasks is to:

As before, when you are satisfied with your selection press Enter and all the tasks in the preview pane will be pushed to try. If you change your mind you can press Esc or Ctrl-C to exit the interface without pushing anything.

Initially fzf will automatically select whichever task is under your cursor. This is a convenience feature for the case where you are only selecting a single task. This feature will be turned off as soon as you lock in a selection with Right-Click, Tab or Ctrl-A.

Queries are built from a series of terms, each separated by a space. Terms are logically joined by the AND operator. For example:

This query has two terms, and is the equivalent of saying: Give me all the tasks that match both the term 'windows' and the term 'mochitest'. In other words, this query matches all Windows mochitest tasks.

Another thing to note is that the order of the terms makes no difference, so 'windows 'mochitest and 'mochitest 'windows are equivalent.

If a term is not prefixed with a single quote, that makes it a fuzzy term. This means the characters in the term need to show up in order, but not in sequence. E.g the fuzzy term max would match the string mozilla firefox (as first there is an m, then an a and finally an x), but not the string firefox by mozilla (since the x is now out of order). Here’s a less contrived example:

Like the query above, this one would also select all Windows mochitest tasks. But it will additionally select:

This is because both sequences of letters (wndws and mchtst) independently appear in order somewhere in this string (remember the order of the terms makes no difference).

At first fuzzy terms may not seem very useful, but they are actually extremely powerful! Let’s use the term from the interface image above, 'linux64 mochibrochr, as an example. First, just notice how in the image fzf highlights the characters that constitute the match in green. Next, notice how typing mochibrochr can quickly get us all mochitest browser-chrome tasks. The power of fuzzy terms is that you don’t need to memorize the exact task labels you are looking for. Just start typing something you think is vaguely correct and chances are you’ll see the task you’re looking for.

The following modifiers can be applied to a search term:

would match the string:

The best way to learn how to write queries is to run mach try fuzzy --no-push and play around with all of these modifiers!

Specifying Queries on the Command Line¶

Sometimes it’s more convenient to skip the interactive interface and specify a query on the command line with -q/--query. This is equivalent to opening the interface then typing: <query><ctrl-a><enter>.

You can pass in multiple queries at once and the results of each will be joined together:

If instead you want the intersection of queries, you can pass in -x/--and:

Presets make it easy to run a pre-determined set of tasks. But sometimes you might not want to run that set exactly as is, you may only want to use the preset as a starting point then add or remove tasks as needed. This can be accomplished with -q/--query or -i/--interactive.

Here are some examples of adding tasks to a preset:

Similarly, -x/--and can be used to filter down a preset by taking the intersection of the two sets:

Unfortunately fzf’s query language uses some characters (namely ', ! and $) that can interfere with your shell when using -q/--query. Below are some tips for how to type out a query on the command line.

The ! character is typically used for history expansion. If you don’t use this feature, the easiest way to specify queries on the command line is to disable it:

If you don’t want to disable history expansion, you can escape your queries like this:

The third option is to use -e/--exact which reverses the behaviour of the ' character (see Additional Arguments for more details). Using this flag means you won’t need to escape the ' character as often and allows you to run your queries like this:

This method is only useful if you find you almost always prefix terms with ' (and rarely use fuzzy terms). Otherwise as soon as you want to use a fuzzy match you’ll run into the same problem as before.

All the examples in these three approaches will select the same set of tasks.

One or more paths to a file or directory may be specified as positional arguments. When specifying paths, the list of available tasks to choose from is filtered down such that only suites that have tests in a specified path can be selected. Notably, only the first chunk of each suite/platform appears. When the tasks are scheduled, only tests that live under one of the specified paths will be run.

When using paths, be aware that all tests under the specified paths will run in the same chunk. This might produce a different ordering from what gets run on production branches, and may yield different results.

For suites that restart the browser between each manifest (like mochitest), this shouldn’t be as big of a concern.

Paths can be used with the interactive fzf window, or using the -q/--query argument. For example, running:

Would produce the following try_task_config.json:

Inside of these tasks, the reftest harness will only run tests that live under layout/reftests/reftest-sanity.

There are a few additional command line arguments you may wish to use:

-e/--exact By default, fzf treats terms as a fuzzy match and prefixing a term with ' turns it into an exact match. If passing in --exact, this behaviour is reversed. Non-prefixed terms become exact, and a ' prefix makes a term fuzzy.

--full By default, only target tasks (e.g tasks that would normally run on mozilla-central) are generated. Passing in --full allows you to select from all tasks. This is useful for things like nightly or release tasks.

-u/--update Update the bootstrapped fzf binary to the latest version.

For a full list of command line arguments, run: